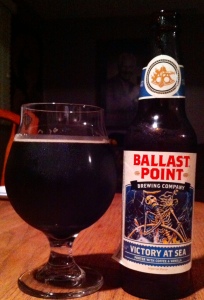 Oh miserable soul, and far worse poor miserable bird, what sins and atrocities have you rained down upon others to be banished forever to the helm of this ship, constantly battling the winds and waves of a raging storm?  No rest for these weary bones, no escape from thine eternal punishment.  Whatever “Victory” you did score in the temporal flesh, it has brought you this unending Victory At Sea.

I’ve had this beer straight from the bottle, on a train1.  I’ve had it from your standard American bar glass, while sitting on a couch.  I’ve sipped on it while laying in bed, reading silently from a book.  Now before I finish off the 6 pack I’m going to drink it from my new favorite glass, while sitting and typing at a desk.  (I did put two of these puppies in my closet for aging.  I couldn’t rationalize spending $14.99 on a 6 pack without saving a couple for later, to see if they improve with time.)

I was hesitant to buy this beer at the high end price.  After much hemming and hawing, and asking a few trusty sources2 for their opinions on the matter, I decided to dive in and hoped that I wouldn’t be lost at sea regretting my voyage.

I should not have worried, as with all the Ballast Point beers I have tried, (the list is not long, but constantly growing) this one too has been well above par.  Every time I’ve opened this beer and poured it into a glass, the potent coffee and vanilla aroma has surprised me.  It is just that good.

The beer tastes wonderful cold right out of the fridge, and it evolves enjoyably as it warms.  The coffee and vanilla become even more noticeable as the temperature of the beer rises.  Whether cold or warm the vanilla balances the subtle bitterness of the cold brewed coffee used in this porter, to make the flavor just right.  Ballast Point uses coffee beans from a fellow San Diego company, Caffe Calabria.  As smooth as this beer is, it’s almost too easy to drink, given it’s double digit ABV.  Whether on draft, a 22oz bottle, or a 6 pack of 12oz bottles I highly encourage you to buy and enjoy this brew.

The beer is a perfect companion while sitting inside as the rain and wind from a wailing storm lash against your windows.  Far better to enjoy it from the comfort and safety of shelter than dare to voyage out on a dark and weather fraught night, lest you end up like the pirate’s bones manning the helm of his ship, as pictured on the label.