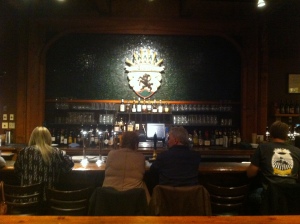 I walked out of the cold night air and into a warm old building, on the night of November first.  Yes, I had lunch at Schlafly Bottleworks and then dinner at the Schlafly Tap Room on the same day; and no, there isn’t a better way to eat out for two meals in one day in St. Louis.

When you walk in there are two options.  To the left is the bar area, where there was live music that night, a few high top tables and a bar serving hard liquor and of course Schlafly beers.  To the right was the restaurant area.  Luck was on on my side again, as there was no wait for a table.  I’m guessing this is rare for a Saturday evening.

The Tap Room is where it all started for Schlafly, back on December 26, 1991.  It is a beautifully restored timber and brick building from the turn of the century.  With the opening of the Schlafly Tap Room, Missouri had it’s first new brewpub since Prohibition.  They expanded in 2003 adding the Bottleworks location, but they still make all their Bomber Bottle series beers at the Tap Room.  While the Bottleworks has all off their mainstay beers on tap and regular rotating seasonal brews, the Tap Room is where you can go to try out the more experimental side of Schlafly.  This is the place to order a Schlafly beer that can not be found anywhere else.  Some make the cut and end up in Bomber bottle production or even make into 6 pack production.  Others are never to be seen again. 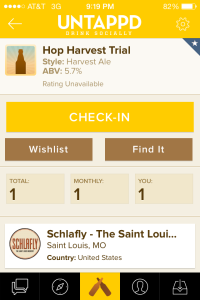 After being seated, I asked if they had a “flight of four” as many brewpubs do.  The waitress said “No, but we have a flight of six.”  I went from disappointment to joyousness in the span of 2 seconds.  In the flight of six, I ordered a few beers I had seen and heard of but never tried and also some that were completely new to me.  One of those “new to me” beers was the Hop Harvest Trial.  It was so new I had to add the beer to Untappd.  Nothing makes a beer geek happier than seeing this on Untappd.  Best part was I also really enjoyed the taste of the beer.

Along with the Hop Harvest Trial, I had the Hop Trial: Endeavor.  This beer was nice but nothing noteworthy.  The other 4 beers I had in the flight of six are as follows: The 80/- (Eighty Shilling) a good Scottish Export ale, the Black Lager – Schwarzbier was not a bad beer, the Tasmanian IPA which is a fantastic beer, and the Grand Cru — a really well made Belgian Strong Pale Ale.  It was a nice variety of beers, none of which were disappointments and a few of which brought exquisite pleasure to my palate.

Food wise I had a chicken wrap which was lacking a bit in taste.  Not bad, but not what I had expected after the great food at the Bottleworks.  Apparently I wasn’t alone in this opinion as I no longer see this item on the Tap Room’s website menu.  While my entree wasn’t exceptional, the service was.  The wait staff was very helpful and friendly and knew how to put up with a beer geek like myself.  I’m sure they have many come through the doors every day. 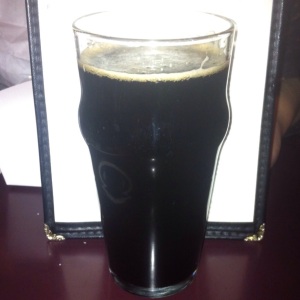 I am sure that the desserts at the Schlafly Tap Room are delicious, I instead opted to drink my dessert in the form of a Cask Vanilla Stout.  This is a really nice beer, which hopefully will make it into bottle production.  While it doesn’t match up to the Big Muddy Vanilla Stout, it is a very solid brew.

Though there are no actual tours that are held at the Tap Room, there are big windows in the dining area that allow one to see into the brewing rooms. The pictures I took don’t do justice to the sight you get to behold while eating and drinking.

Conveniently located in downtown St. Louis the Schlalfy Tap Room is a great place to take a date to dinner, grab a meal with friends, or just hit up during a night on the town.  It’s definitely the best place to go to try out the new innovative beers the brewmasters at Schlafly are creating.  I can’t wait to go back.