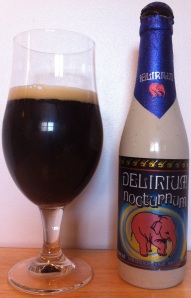 Slowly at first, he drinks down the dark draught of liquid presented to him.  He is unsure of what he is pouring into his body, his temple.  He holds the now half full glass up to the waning light of the day, to his surprise it is clear and clean, not cloudy, no powdery poison remnants present, there is nothing to warrant paranoia from his suspecting mind.  The deep dark amber hue makes him think of home, the Arizona dessert and the crimson granite of the Grand Canyon, that lays half a world away.  Little does he know that the poison comes from the brewing process itself.  No after market additive was needed.  The fermentation created the alcohol that is now coursing through his blood stream.  The question becomes, will he stop at one or accept the subsequent glasses his guests are offering him, when he hasn’t even finished his first.

As he consumes the last of his drink, darkness envelops the sky and he little realizes the name of the elixir that he has engulfed will engulf him.  His evening, his absence from the day will become an absence from reason as his hosts were unaware of what their act of hospitality will bring upon him.  Delirium Nocturnum, a harmless fun name for a brew, will capture the next 8 hours of this man’s soul.

I have been holding on to this particular beer for a few months now.  I bought it back in December, when I had some extra cash on hand.  Since then it has been sitting in my “poor man’s beer cellar,” a.k.a. my closet.  Today was the day of consumption, as I couldn’t hold out any longer.  While this beer is good, it is a slight disappointment for me.  I had such a wonderful experience drinking the Delirium Tremens, I had hoped for a similar voyage with the imbibing of this brew.  I am able to pick out the aromas of black licorice and coriander, I think.  I’m not entirely sure what coriander really smells like, but this herb appears in many of my favorite drinks, such as gin, so I must like it.  With continued tasting, I find little in the front of the beer.  Bitterness from the hops takes over the middle of the beer which then slides into a nice balanced finish of sour and sweet.

While I preferred the Delirium Tremens, this beer is worth picking up if just for the bottle.  It’s a good brew, with even better bottle artwork.  The label is reminiscent of the Disney movie “Dumbo,” especially the scene in which the elephant gets drunk.  Thankfully after learning through idiocy how not to open a foil covered bottle back with my Delirium Tremens review, I was able to open this beer in no time without any foil mess to clean up.

One thought on “Delirium Nocturnum”